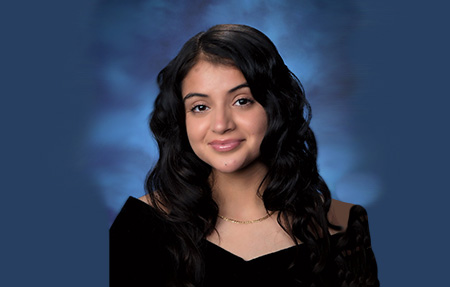 Arlene, who is from Chambersburg, Pennsylvania, enrolled at MHS in 2009 as a kindergartener. Throughout high school, she has flourished in not just academics, but also in athletics and community service.

Arlene has been highly active in a variety of MHS programs, including participating in the Student Government Association, the M.O.L.D. mentoring program, varsity soccer, and softball. Through her academic achievement, she earned induction in the National Honor Society and the Spanish National Honor Society. In addition, she was awarded a Gold Key in the Central Pennsylvania Scholastic Art and Writing competition and was honored as a Rotary Student of the Month.

Arlene also demonstrated her commitment to the community beyond MHS by participating in an internship at Building Our Pride in Chambersburg. Her postsecondary plans also demonstrate her commitment to high academic standards and caring for others. She plans to pursue a bachelor’s degree in nursing as the first step toward becoming a nurse practitioner. Her goal is to work for a heath care facility in Philadelphia and to join Doctors without Borders.