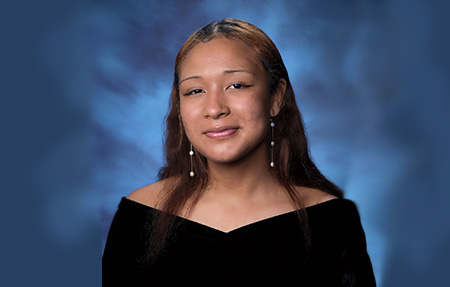 Symyra, who is from Howard, Pennsylvania, enrolled at MHS as a fourth-grader after having been in the foster care system. She has been an actively engaged member of the MHS community throughout the years, while also maintaining high academic standards.

Currently the president of the Student Government Association, Symyra has held leadership roles in the SGA and the M.O.L.D. mentoring program. She has also been active in the Mock Trial competition and has been a member of Hershey Community Youth Alliance and Four-Ever Connect. Symyra was inducted into the National Honor Society and honored as a Rotary Student of the Month.

She has also taken advantage of additional learning opportunities by participating in communications internships with Hershey Entertainment & Resorts and the MHS Communications Office.

Symyra’s postsecondary plans include earning a bachelor’s degree in legal studies. Describing herself as passionate about getting involved in her community, she plans to become active on her campus and volunteer for community-based service opportunities.