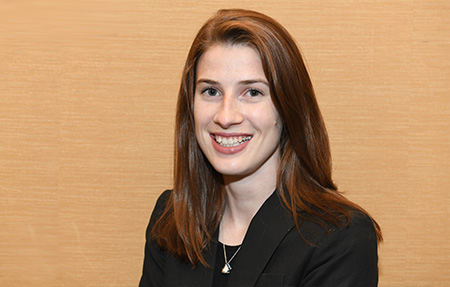 After graduation from Dickinson, she joined the lab of Elizabeth Engle, M.D. at Boston Children’s Hospital as a research assistant to study the molecular mechanisms of several eye movement disorders. Jessica worked under the supervision of Mary Whitman, M.D., Ph.D. until she helped Dr. Whitman establish her own lab. She volunteered weekly in the hospital’s emergency department and continued to volunteer with her college’s Admissions Office.

At Dickinson, Jessica was active with Alpha Phi Omega, Dickinson College Dog House, service trips to West Virginia and Guatemala, Neuroscience Club, and Don’t Conceal to Heal. She volunteered with the Admissions Office as a tour guide and student interviewer. She also organized and led pre-orientation programming for incoming first-year students for two consecutive years and served as a first-year mentor.

Jessica’s undergraduate honors research thesis in the lab of Professor Mary Niblock, Ph.D. focused on delineating the timeline of respiratory development and the activation of respiratory nuclei in the brainstem. As an undergraduate research assistant, she also worked on research that focused on extracting compounds from marine plants and observing how they modulate the accumulation of amyloid-beta aggregates in vitro. Jessica has numerous scholarly publications.

She continues to volunteer with Dickinson’s Admissions Office, and in her free time, she plays soccer, takes pottery classes, rock climbs, and hikes with her rescue dog Bernie.